The food of Bali offers a toothsome experience to the taste-buds of a tourist. Some of the famous and mostly favored dishes on the splatter here are : 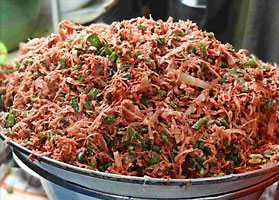 Lawar is a popular Balinese food comprising mixed vegetable, chopped meat, spices, and coconut with natural flavors. There are different varieties of Lawar such as Red Lawar, White Lawar, Pork lawar, and Padamare Lawar. It is a traditional dish and an integral part of religious festivals, ceremonies and family functions. Lawar is generally served with rice & other dishes 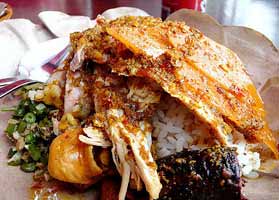 Babi Guling or suckling pig, is a popular Balinese dishes. In this serving, the pig is stuffed and infused with a concoction of turmeric, lemongrass, coriander seeds, garlic and black pepper, and spit-roasted. This delicacy is featured in many locally stalls called warungs in Balinese where one can enjoy a quick lunch or dinner. 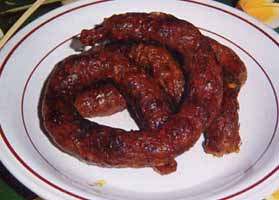 Urutan Babi is a Balinese sausage made from intestines of a pig, spice paste, stuffed with pork meat and fried till brown. It is generally served with rice and wine. 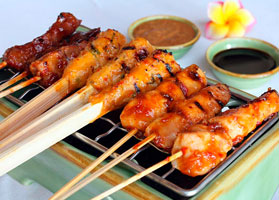 Sate is sea fish or turtle meat, made with spices, brown sugar, and green coconut. It is generally cooked over charcoal that gives them a smoky and charred flavor. It is served as a dish and as an offering in ritual ceremony. Served after grilling it is best relished with Lawar. 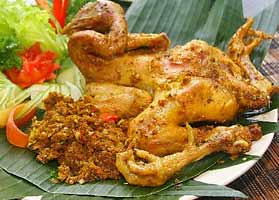 Ayam Betutu is roasted chicken in banala leaf with spices such as turmeric, kencur, ginger, onion, galangal, salam leaf, garlic, and chilies. All these spices are mixed and put inside the chicken. That is why it is called Ayam Betutu. Ayam Betutu is usually served in Balinese traditional ceremonies such as Odalan, Otonan, wedding ceremony, etc. 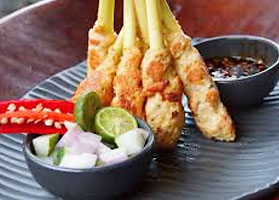 Sate Languan is made of sea fish, green coconut, spices, and brown sugar. It is a traditional food of Klungkung regency, but it can be found in all over Bali. Sate Languan is served in Balinese ritual ceremonies. It is better served right after grilled (while it is still hot). It can last for only one day. 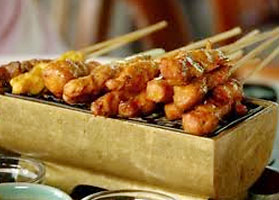 Sate Lembat is made of crushed meat mixed with grated coconut and spices. The meat is usually pork, chicken, duck, and turtle. Sate Lembat is served in Balinese ritual and traditional ceremonies. It is also available in many Balinese restaurants, along with Urutan, Babi Guling, and Lawar. 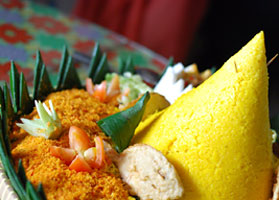 Nasi Kuning is Balinese Yellow Rice that is generally served during Kuningan Day, a sacred Balinese Hindhu Holy Day that comes after 210 days on Saniscara (Saturday) as per Kliwon Wuku Kuningan. But this dish is also being served at birthday parties, thanksgiving ceremonies, and other celebrations. The dish is generally served with kemangi leaf, fried chili spices, and green-peas. 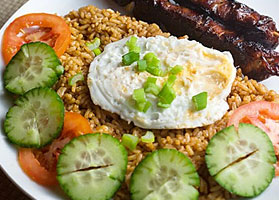 Nasi Yasa is made from egg, chicken, and raw vegetable. It is usually in religious ceremonies like Saraswati, Ciwalatri Day and in ritual ceremonies. 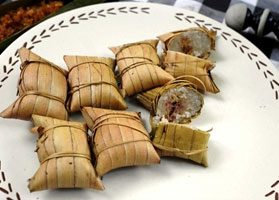 Jajan Bantal is a popular and very common dish in Bali made from sticky rice, fruits and peas. The dish is generally wrapped in coconut leaf, rope- tied, and steamed. It both served as a dish and as a ritual offering in ritual ceremonies.