Places to Visit in Dubai (Top Attractions in Dubai) 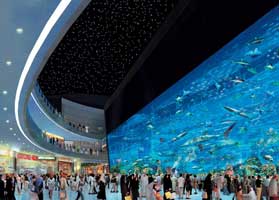 Situated along Doha Road just far Sheikh Zayed Road, the Dubai Mall, which hosted more visitors than New York City last year, is the largest and most visited entertainment and shopping complex in the world. Besides being home to more than 1,200 retail stores, this premier mall of Dubai has other main attractions like Aquarium, which is home to one of the largest viewing panels, an ice skating rink of Olympic proportions and an underwater zoo. This mall, which provides entry to the Burj Khalifa as well as the Dubai Aquarium, also hosts the particular events like the annual Dubai Shopping Festival and the Dubai Summer Surprises Festival. To expand this mall, even further, plans were announced by the officials before this year. 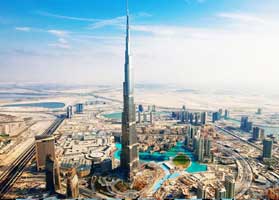 With its height of 829.8 m, Burj Khalifa, which is the landmark building of Dubai and a sight to take the magnificent bird’s eye view of the city atop the Observation Deck on the 124th floor of this building, is the tallest building in the world. Although the average duration of visits is 90 minutes, yet visitors can stay as long as they are willing to. This shimmering tower can be viewed from the cafes on the deck situated outside Dubai Mall. Owing to the renowned city lights panoramas of Dubai, Nighttime visits are especially famous with photographers. The entry to this building is provided from the Dubai Mall.
Opening Hours: - 08.30 a.m. to 01.00 p.m. (everyday) 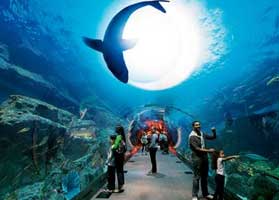 Home to 140 species of marine life in the vast suspended tank on the ground level of the Dubai Mall, the Dubai Aquarium, which is situated in the Dubai Mall along the Sheikh Zayed Road, is one of the top tourist attractions of the city. Visitors can walk through the aquarium tunnels while taking the free view from the mall if they enter the Underwater Zoo. To get a closer look at the marine life, the special myriad activities of this aquarium include Glass bottom boat tours (on top of the tank), shark diving and cage snorkeling.
Opening Hours : - 10:00 a.m. to 10:00 p.m. (Monday to Friday)
10:00 a.m. to Midnight (Saturday & Sunday)
Entry Fee: - Adults - 70 AED & Children - 55 AED 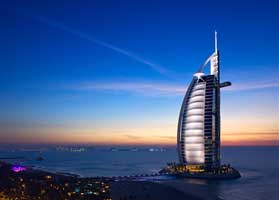 Situated on its own artificial island on the Dubai coastline and rising up to the height of 321 meters, the Burj Al-Arab is the tallest hotel in the world. Brightened by a choreographed colored light display at night, the exterior of the Burj Al-Arab is designed to look like a billowing dhow sail. Home to the most luxurious suites with its cost of more than $15,000 per night, this hotel, which is decadent in every way of probability, is one of the most lavish hotels in the globe. By going for dinner at the underwater Al-Mahara restaurant, the people without unlimited credit can get the experience of the over-the-top opulence and while grabbing, they can take the glimpse of the sea life through the floor-to-ceiling glass panels in the room walls. Or to take the surprising panoramic views of the city of Dubai, tourists can book afternoon tea at the Skyview Bar (a minimum spend is compulsory) on the 27th floor of this hotel. 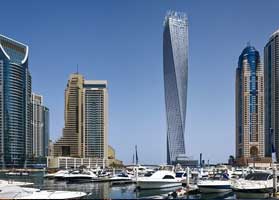 Home to 495 apartments with 75 storeys, the Cayan Tower (called Infinity Tower prior to its inauguration), which is 1,010 feet (307 meters) high, is the tallest twisted tower (skyscraper) in the world having a twist of 90 degrees. The wind force on the tower is greatly lessened by the twist as well as making the building particular. Owing to the flexure of the structure, the residents in the lower part of the skyscraper will take their view towards the direction of the waterfront promenade of Dubai Marina while those on the upper floors are turned to face the Persian Gulf. 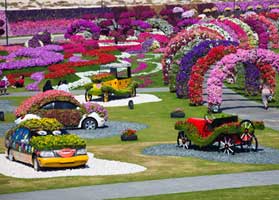 Home to more than 45 million flowers over a site of 72,000 square meters as well as traditional flower beds, Dubai Miracle Garden, which is situated in Dubailand close to the Arabian Ranches, is the largest natural flower garden in the world, which was opened on the Valentine’s Day in 2015. This flower garden has the features of topiary-style shows with blooms fashioned into the shapes of stars, hearts, pyramids, igloos and likewise. Repeat visitors will get a new experience in this garden each time as floral shows will alter during each season. 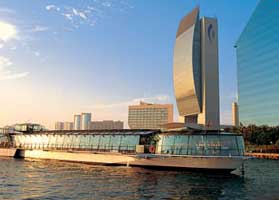 Home to 1,608 luxurious rooms with its height of over 100 feet higher than the Eiffel Tower, the dazzling JW Marriott Marquis Hotel, Dubai, which was opened in February, 2015, is the tallest hotel in the world. Having a jagged design inspired by the trunk of a date palm, this hotel is crowned with white lights like sparkling diamonds. On a foggy morning with the tops of adjoining towers poking through like valuable jewels laid out on cotton wool, this largest hotel of the world provides the guests on its upper floors the experience of waking up above the clouds. 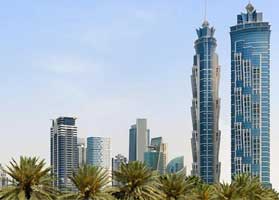 Located on the Sheikh Zayed Road in Dubai near interchange 6 in Jebel Ali Village, Ibn Battuta Mall, which has its features of over 275 retail shops, 50 restaurants and food outlets, a 21-screen cinema comprising the merely IMAX theatre in the UAE, is the world’s largest themed shopping mall. Uniquely designed to mark the travels of the renowned Arabic explorer named Ibn Battuta, this majestic mall, which has the parking space, with a total of 5,21,000 square meters, for more than 4,500 vehicles, is bringing the revolution of the entertainment and retail experience in Dubai. 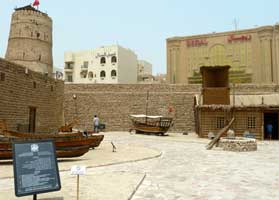 Dubai Museum is the excellent museum of Dubai, which is situated along Al-Fahidi Street, Bur Dubai at the Al-Fahidi Fort, constructed in 1787 to protect Dubai Creek. The walls of the fort are constructed out of traditional coral blocks and set together with lime. The ceiling of the fort is built of palm fronts, plaster and mud and the upper floor of it is supported by the poles of wood called ‘Handels’. In its history, the fort has been used as a residence of the governing dynasty, prison, garrison and seat of government. After its restoration in 1971 and at next extensively in 1995, this fort is at present the premier museum of the city. Displaying the mammoth expansion that hit the area after the oil boom, the entrance of it houses an enticing exhibition of ancient maps of the Emirates and Dubai. 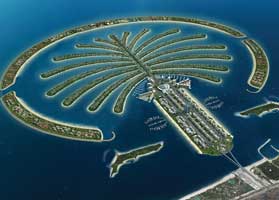 Consisted of three man-made islands – the Palm Jumeriah, Palm Deira and Palm Jebel Ali – causing to consist of luxury residences and hotels comprising beach side villas as well as shopping malls, restaurants, sport facilities and water parks, this archipelago far the Persian Gulf has been developed by Nakheel properties. The other main two artificial archipelago developments of Nakheel, which are still in development, comprise The World – a group of islands probably shaped like a map of the globe and The Universe – aimed for assuming the shape of the Solar System and the Milky Way. 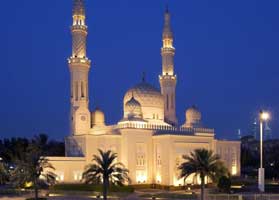 Constructed in the medieval Fatimid tradition with two minarets showing the subtle description in the stonework and regarded by several to be the most charming mosque in Dubai, the stone structure of the Jumeriah Mosque is an excellent example of Islamic architecture. This grand mosque, which is the real replica of the Al-Azhar Mosque in Cairo, that is 8 fold larger than its size, looks especially fascinating in the evening when illuminated with floodlights. 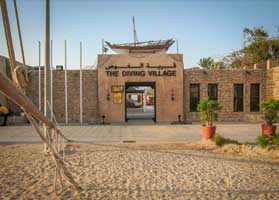 Having shows pertaining to dhow building and pearl diving – two of the historic mainstays of ancient Dubai, the Heritage and Diving Village showcases the cultural, architectural and maritime heritage of Dubai. This charming village also provides its visitors the chance of taking the recreations of coastal village life and traditional Bedouin, with Persian Homes, a traditional coffeehouse and a little Souk, used as the venue to set the stalls by the weavers and potters to practice their handicrafts. Here, the performance of local dance and music is made between October and April and practitioners of traditional medicine can provide advice for the visitors.

Previous Next
Rehman khan
Hyderabad
Reviewed On 26-Feb-2016
Thanks to you for the amazing tour of the tourist destination of Bali under Bali Honeymoon Pacakages, that was organized and planned by you and your team. Bali (Nicknamed as the ‘Island of Gods’) is the wonderful land with splendid beaches, lush green and terraced paddy fields and volcanoes keep to serve the variegated interest of travel of vacationers, wishing for a Gateway far from their lives enriched with monotony.
Rahul Sharma
Delhi
Reviewed On 03-Aug-2015
I am very thankful to you and all the members of the tour company ARV Holidays Pvt. Ltd. for arranging and suggesting Dubai Tour Package in so good manner. In Dubai, I shopped a lot, enjoyed the finest dining and the architectural wonders of the modern times and got a lifetime experience. Dubai, which is also called the desert city, is very famous for the Burj Khalifa, the tallest building in the world.
View All Traveller Reviews »