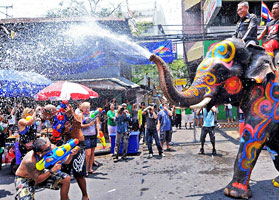 Occurring all over Thailand and majorly in Pattaya, Silom Road and Khaosan Road in Bangkok, Chiang Mai and Phra Pradaeng near Bangkok on the fixed official date of 13-15 April every year, Songkran Festival, which is the most well-famous of all Thai festivals, is excellent for those, who are fond of a good water fight. To mark the traditional Thai New Year, this festival is celebrated on the national level. During the festivals, people sprinkle water over one another as a symbol of cleansing to begin the New Year. 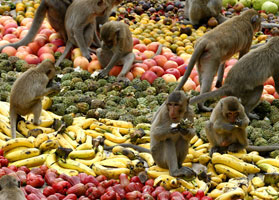 Taking place on the last Sunday of the month of November of every year, Monkey Buffet Festival is the bizarre festival, which is good for animal lovers. Being one of the world’s largest monkey parties, this festival is celebrated in the town of Lopburi to mark appreciation to monkeys, the major tourist attraction of this place because the ruins of the historical city of Lopburi is one of the most renowned places in Thailand. By serving a vast buffet of food, only for the smart and adorable animals, this festival is celebrated and some funny photos are made on this occasion. 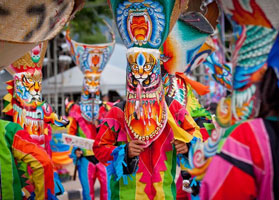 Being matchless to the Dan Sai district of the Loei Province in Isan, the Phi Ta Khon Festival is better famous as the ‘Ghost Festival’ for reflecting the belief of the Locals of Isan in spirits and ghosts. Occurring once a year during the month of around June/July, this festival is possibly the most colorful festival of Thailand because it is a part of a grand merit-making festival called the ‘Boon Luang’ festival. Putting on bright, colorful masks and long trailing costumes made from colorful strips of cloth sewn together, young men of the community dress up as spirits. On this occasion, people have an abundance of rejoicing and dancing. 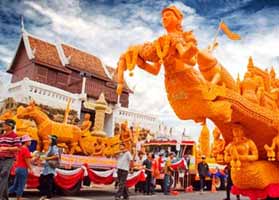 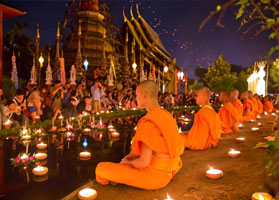 Loi Krathong or Festival of Lights

Held majorly in Chiang Mai and Sukhothai on one night during the full moon of the 12th lunar month (usually in the month of mid-November), Loi Krathong Festival or Festival of Light is, which is one of the best-preserved and the oldest traditions of the kingdom, is the most romantic festival in Thailand. In Thai Language, ‘Loy’ signifies ‘floating’ while Krathong is a small thing in the shape of a lotus flower, simply prepared from the leaves of the banana. Thousands of people proceed to their local canal or river to make a wish on the evening of the festival. 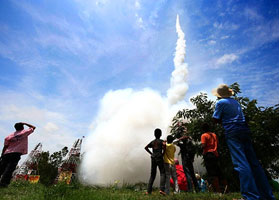 Also called ‘Ngan Bun Bang Fai’ in Thai Language, Rocket Festival, which is most magnificently celebrated in Yasothon province in the month of May every year, is a matchless festival of the Northeast. During this grand festival, the rockets made of bamboo are launched as a yearly plea to gods for an abundance of rainfall in the season of rain. 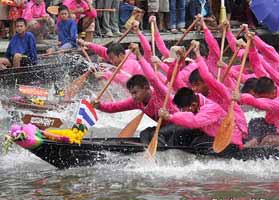 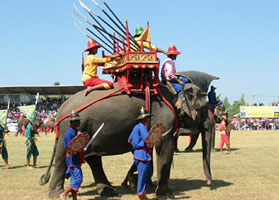 Organized on the 3rd weekend of November every year, Surin Elephant Round-up is the show, which has the features of elephant race and hunt, elephants in the battles of ancient times and elephant football. This round-up is celebrated in Surin, a northeastern province, renowned for its world-popular elephant round-up. 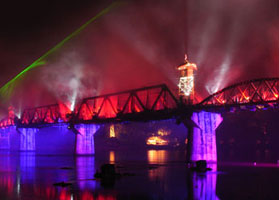 Featuring a fun fair, historical exhibition, exciting sound and light presentation, Bazaar, the River Kwai Bridge Week is the festival, which is celebrated in the province of Kanchanburi to mark the terrible ordeal suffered during the construction of the Death Railway to be used by the Japanese army as a route of supply from Thailand to Burma in World War II. This festival is organized during the period of approx the end of November or the commencement of December.